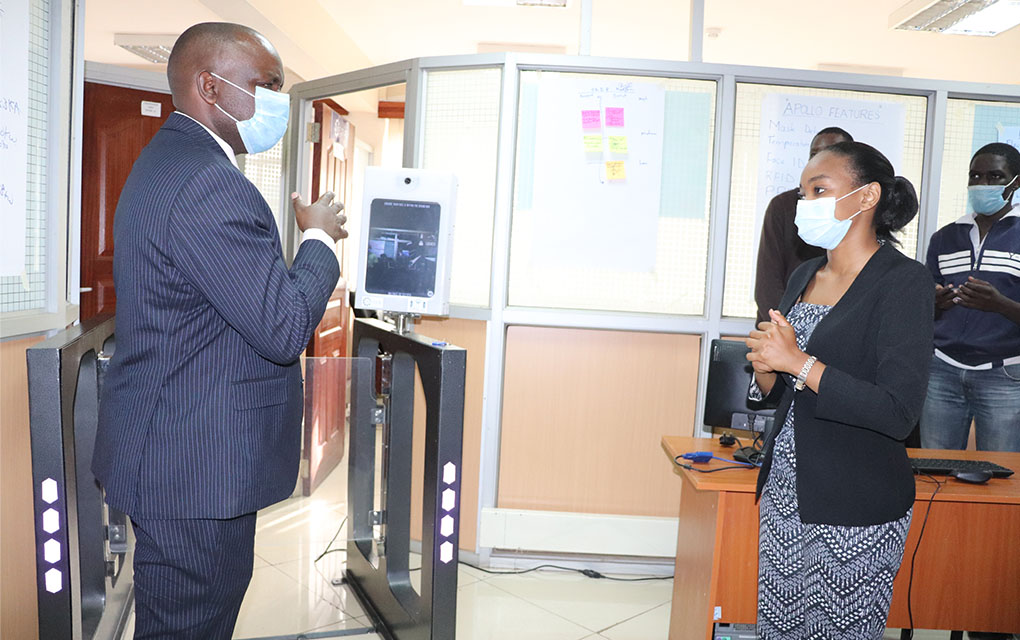 A team of innovators from Kenyatta University have developed an intelligent barrier system to help in the fight against Covid-19.

Founded in late 2020, Afecs Company limited utilizes the latest technology to solve real societal problems of which Covid-19 has stood out to be one of the greatest in the modern history.

Apollo is a smart device which is able to measure body temperature, check whether the user has a face mask on and that it’s well-worn. The system can also be customized to incorporate the face ID technology as the Chief Operations Officer, Cynthia Thuo states.

“Apollo can be fitted with the face ID technology. The face technology is adopted to control access into restricted areas or to specific machines within an industrial area. Access is also permitted using the Radio Frequency Identification (RFID), which will ensure only permitted personnel can access a particular area of the workplace to reduce accidents and increase security.”

Cynthia, the UN person of the year 2020 award winner and Head of State Commendation recipient adds that the establishment of the company was influenced by the Covid-19 pandemic and that the directors of the company mainly consist of the team which developed the Tiba-vent ventilators – a low cost ventilator to combat COVID-19.

The electric and electronic engineer says that the intelligent barrier system is suitable for institutions, banking halls, museums, airports, malls and any other restricted entry areas. Afecs’ Chief Technical Officer, Eric Odhiambo however says that the system has a percentage efficiency of about 97% as they have conducted high target performance testing, and on board diagnostics on the system, and Apollo has performed tremendously well.

“We’ve conducted several performance tests on the system. We even did the tests in an event with over 100 attendants and it functioned beyond expectations. The only features we are changing are the barrier motors,” Odhiambo says.

The Company has received massive orders for the system across the country, with Kenyatta University also making orders to inculcate the spirit of innovation in its students.

Cynthia states that the startup has enhanced the skill of collaboration outside class environment as they are able to work cohesively as a team to achieve their goals, adding that Kenya and

Africa at large have technological needs that Afecs seeks to address. “Adversity creates opportunity. Africa depends on technology from abroad and we want to change that mentality. Charity begins at home and we’ll have to take care of Africa’s technological needs then we can focus on the other parts of the world,” she says.