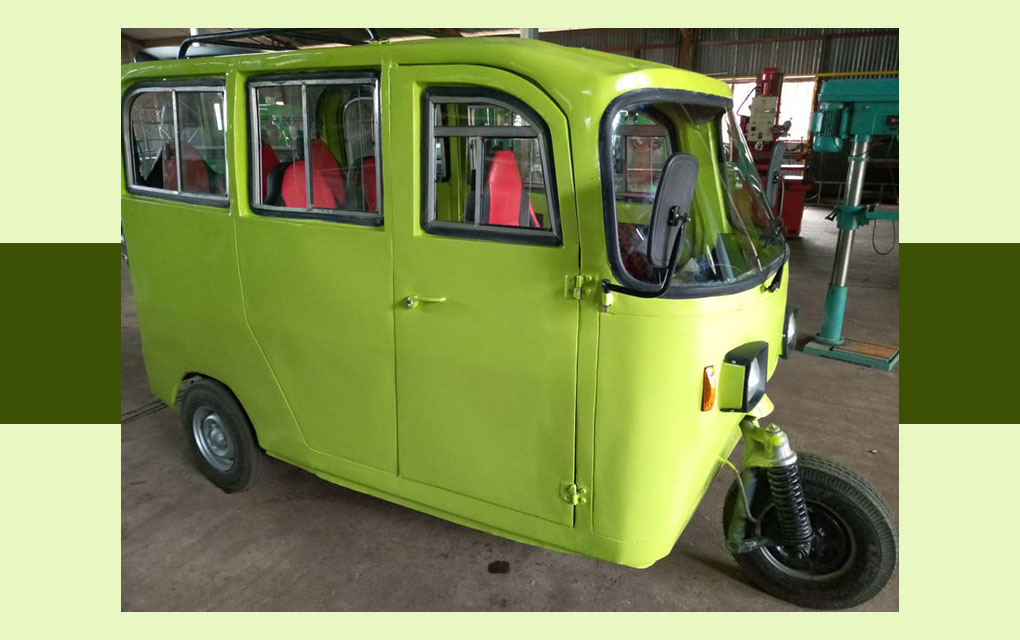 Kenyan coastal city of Mombasa is known for its signature, ubiquitous black and yellow tuk-tuks. About 10,000 conventional fossil fuel-powered tuk-tuks are said to operate in Mombasa, with over half of these in the city’s CBD.

In Nairobi, the Kenyan capital and United Nation’s African headquarters, traffic snarl-up is something the inhabitants have learnt to live with. Conventional hand carts, commonly known as Mkokoteni are characteristics of Nairobi’s streets, and Wakulima market – the city’s largest fresh produce market. Though highly inefficient, mkokoteni has been a source of lively hood for many Kenyan families.

Auto truck East Africa, a startup founded by Kenneth Guantai in 2015 is revolutionizing the mobility space, and has innovated electric tuk-tuks, and hand carts. A glimpse of the electric carts

The startup which is currently incubated at the National Youth Service (NYS) workshop located within the NYS Engineering Institute has working prototypes of both the three wheelers and the four wheelers.

Guantai who is also the head of research and innovation at the NYS states that, the idea to come up with the innovation was based on sheer need to solve congestion caused by local conventional hand cart in the Kenya’s capital, adding that they are aiming at being the leading green mobility company in the African continent.

“We have produced the first prototype of the tuk tuk and it had to undergo rigorous testing before it goes into the market. We are now going into the pilot phase and are preparing for mass production,” Guantai says.

Bradley Mbagaya, the Chief Technical Officer and lead Engineer says the three wheeler, commonly known as eco cab is fitted with two lead batteries, with a changeover system technology to change automatically to the other set of batteries once one set is depleted of charge.

The locally manufactured cab is environmental friendly, has 1.5 tons capacity, 6 passengers’ space, and also uses regenerating motion recharge system, whereby it taps the kinetic energy generated due to motion to recharge the batteries. The cab currently achieves between 450 and 500 km, but the innovators are aiming at improving it to achieve 1000km before recharge.

The elo carts, one of their standout patented products can be customized depending on the clientele needs, and is fitted with electromagnetic braking system, and a 5km/h maximum speed.

Guantai, a graduate of Economics urges young innovators to never give up on the little they are doing in the innovation space.

“As a young innovator, you have to be resilient and very persistent. A dream does not become viable within a day. It’s five years since I started this innovation and I haven’t given up,” he says.

He is however appealing to the government to utilize the state of the art machinery lying idle in the NYS workshops to tap the innovation potential in the Kenyan youths, adding that the state should also allocate substantial budget for innovation and research to fund viable innovations.

The innovation was admitted into the 2017/2018 Leaders in Innovation Fellowship (LIF) programme run by the Kenya National Innovation Agency (KeNIA), in collaboration with the

Royal Academy of Engineers based in London, and awarded a 5 million grant. “In 2017, I was looking for financial support when I came across an advert by KeNIA. After successful application and admission into the LIF programme, we underwent rigorous training in Kenya and the UK. The agency also awarded us a 5M commercialization grant which we used to hire skilled engineers to piece together the innovation, and also imported spare parts,” Guantai states.

The startup currently has ten permanent experts, and aims at recruiting other experts on a need basis. In the spirit of Buy Kenya Build Kenya, the team is aiming at contributing greatly to the country’s GDP, and the UN’s Sustainable Development Goals on Economic growth, clean cities and industrialization, of which Kenya is a signatory.