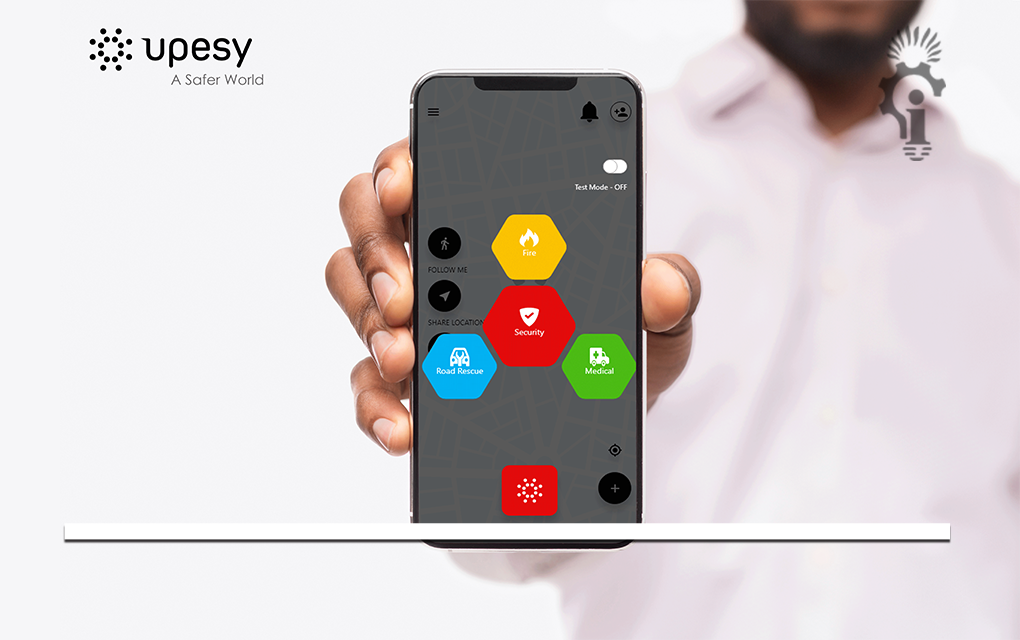 The Leadership in Innovation Fellowship (LIF) beneficiary (2017/2018 cohort) and the 2020 UK’s Newton Chair’s prize finalists, Upesy World Limited has come out to speak about the pivotal role played by the Kenya National Innovation Agency (KeNIA) to ensure the success of their venture.

Upesy World Limited co-founder, Eric Murithi notes that the idea of an enterprise came about as a result of a mugging experience that he and his friend went through after being accosted by thieves one evening on their way home. Without a means to reach out for help from the police and even friends, they had to endure that traumatic experience.

Following the scary ordeal, Murithi who is an electrical engineer teamed up with Edna Kendi, a software engineer and Vincent Awino, a geospatial engineer to turn the mobile phone into a panic button. Resulting into the birth of Upesy; a one stop shop for all matters emergency. 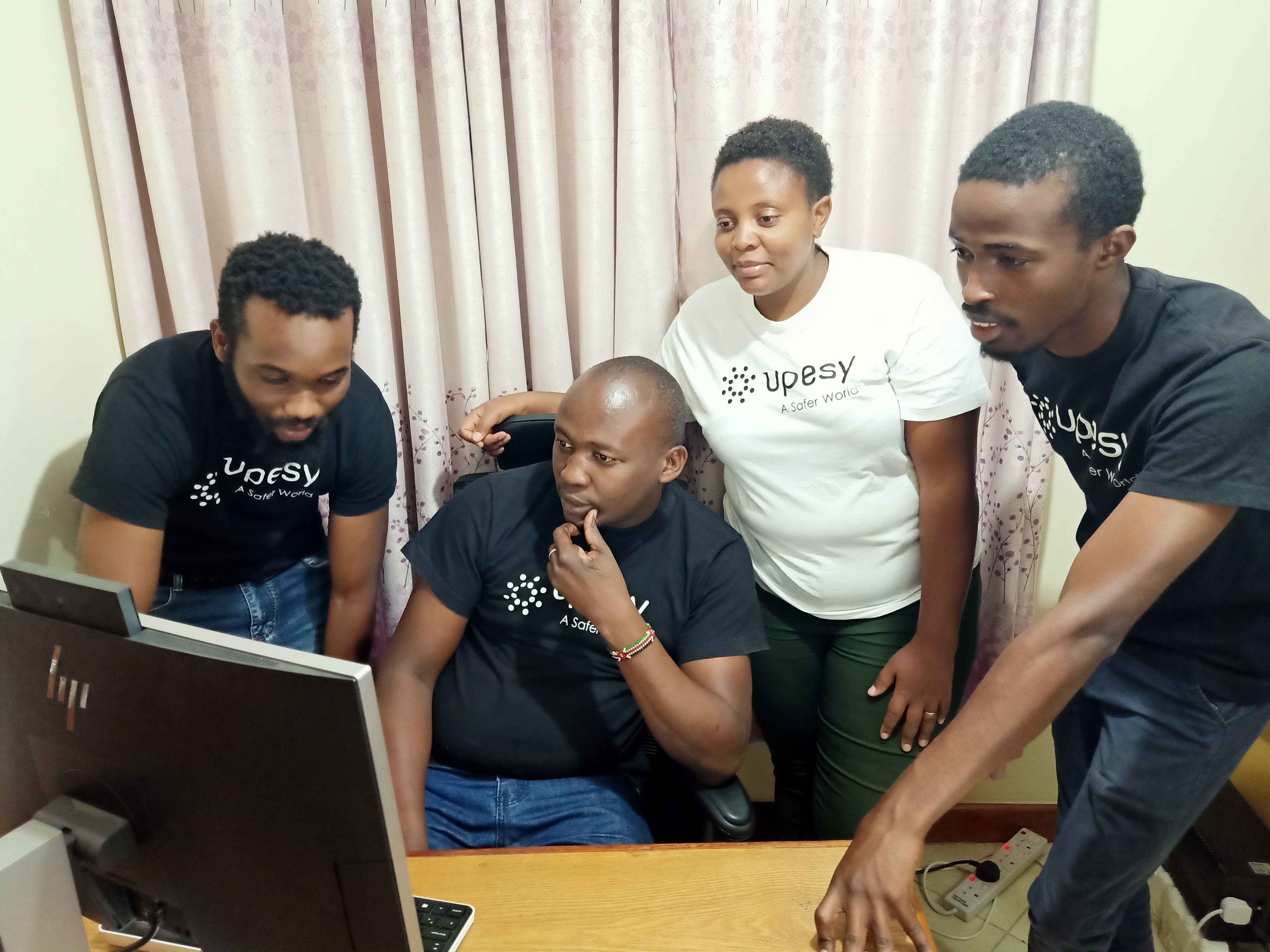 The Upesy Brains at Work

How the App Works

The user is to press the power button four times which then automatically sends an alert to the emergency contacts included in the app and the police manning the Integrated Command, Control and Communication (IC3) center who can then assign such tasks to officers on the ground. For paid up subscribers, the alert also goes to private companies such as security and ambulance services.

The firm is in partnership with security firms, G4S, Secure and 911 Group as well as AAR and St John Ambulance for ambulance response services in case of accidents.

Through the LIF programme, Mr. Murithi underwent a rigorous training at the Royal Academy of Engineers in the UK, and the team was granted access to expert coaches, and opportunities for international networking.

“Before we got seed funding from the Kenya National Innovation Agency (KeNIA), the mobile app was known as TukoChonjo. The team wasn’t working full time and we were outsourcing most of the development from third parties. We didn’t even know how to turn our prototype into a business. The trip to the Royal Academy of Engineers helped us a great deal.” Eric Murithi says.

Around July 2017, when Eric and his two colleagues, Edna and Vincent were very eager to find someone to inject capital into what they were doing, he unexpectedly came across a call for LIF application advert on a daily newspaper. Without any prior knowledge of the existence of KeNIA, he decided to try his luck.

“I had not heard about KeNIA before but I decided to try my luck and apply blindly. The application exercise took us around 2-3 hours and it entailed what we do, the economic impact we’re creating, how we’ll create employment opportunities and why this was a great product.

Of course the chance to travel to the UK also enticed me. I love travelling a lot.” He says, smiling.

The team, now working from home due to the Covid 19 pandemic says that the partnership between KeNIA and the Royal Academy of Engineers was a game changer for them.

“The partnership between KeNIA and the Royal Academy was our biggest gain. We learnt Intellectual Property, negotiation, customer centric products, product development, and commercialization. We realized that we had put so many features in our app which were not necessary. Interacting with career mentors and international subject matter experts really opened our eyes and shaped our thinking.” Eric states.

The Team Presents Upesy to HE Uhuru Kenyatta

Eric and Vincent reiterate that with the injection of Ksh. 5 million seed funding into their business, KeNIA accelerated their growth process as they were able to engage with local investors, attract top tier partners who came on board, and were also able to scale up and bring greater impact to the target market.

“This was a great boost and it helped us because we were able to own the product, we hired two full time app developers who dedicated their time to work on the app, we registered our utility model, the funding gave us leverage to have more partners on board and grew from just one partner to seven partners and three more are also soon coming on board.”

“We were able to organize and execute a six month pilot at the Kenya police to help them understand how the app operates, our customer base grew from about 1000 to 5000, and it helped us realize a steady stream of revenue and had investors coming on board.” .

According to Vincent Awino, tech startups being very expensive to run and sustain, are as good as the money behind them. Eric Murithi however reiterates that building KeNIA’s capacity in terms of finances and man power is necessary for a greater impact.

“I would love to see a KeNIA which is more funded and capacitated to help more young people realize their entrepreneurial and innovative dreams. KeNIA can impact thousands and thousands of lives. Unlike us who didn’t know about KeNIA, there is need for more publicity. People need to know that the Kenya National Innovation Agency exists.” Murithi says.

They add that KeNIA should bring together the network of investors (both local and international) to the market and it should also have a database of promising startups which they can closely monitor and even invest in.

The Global Startups Ecosystem report (https://startupgenome.com/report/gser2020) released in June, 2020 featured Nairobi, Kenya as one of the top emerging startup ecosystems in the world. However, starting a startup does not guarantee its success and Vincent Awino advices prospective innovators to first find out what is valuable to the customers and focus on that.

“Start with the idea you have, ensure the minimum viable product is attracting customers then you can seek for seed funding. The next step is where you grow with the market in terms of what the market wants.

But most importantly, collect data of what your customers want. Data is the most vital thing that you should base your decisions upon.”

“99% of people on the streets, in matatus or in offices, if are in an emergency situation don’t know what to do. This narrative should change because with Upesy, anyone with a mobile phone is able to get help from other parties and it is KENIA that has made us make these streets a safer world.” Murithi concludes.